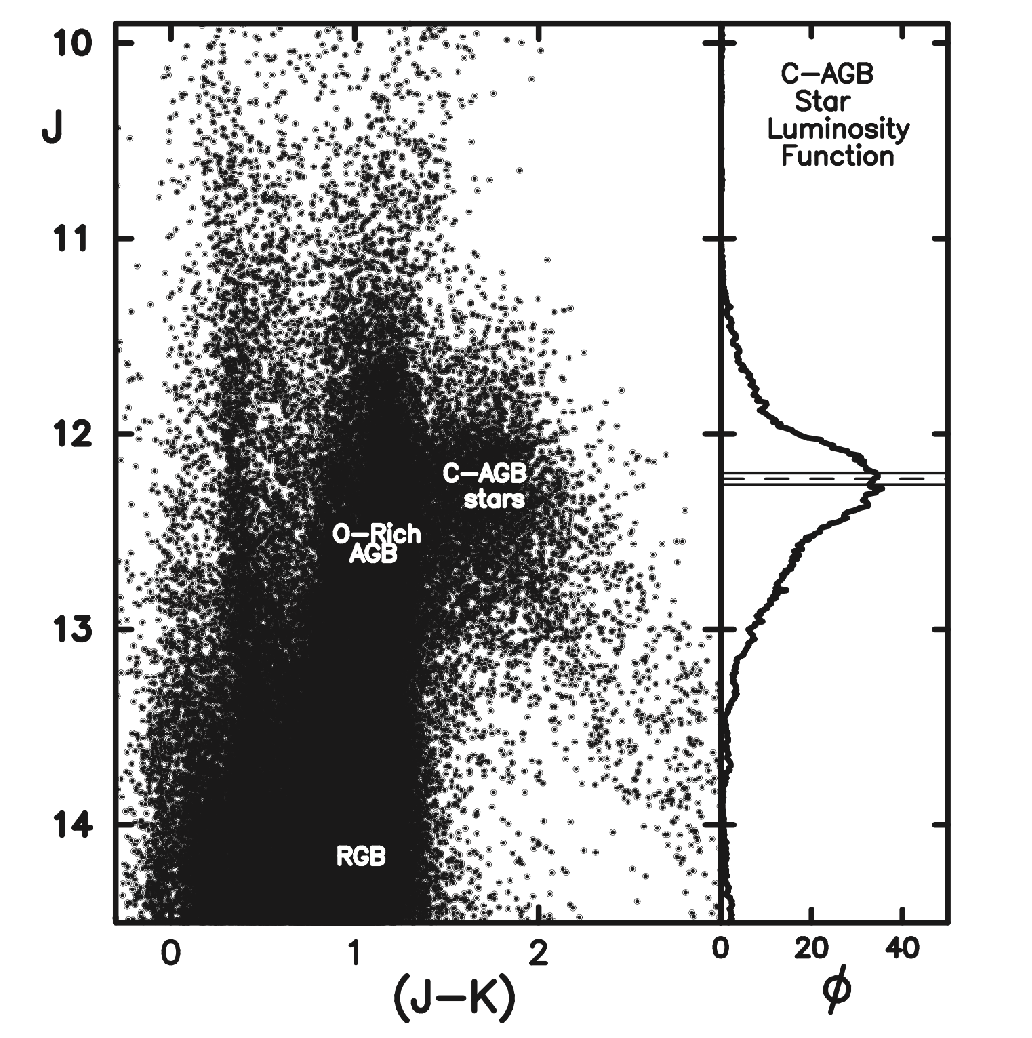 Measuring both precise and accurate distances to galaxies persists as a challenging problem in astronomy. Attempts to discover, develop, and refine new distance indicator techniques in the past two decades have only increased as the need for greater accuracy has grown. One goal of these endeavors, a robust calibration of type Ia supernovae, would provide a more secure determination of H0 in the nearby universe and a better understanding of the magnitude and significance of the current tension between local (late-time) values of H0 and those derived from (early-time) cosmological modeling of cosmic microwave background (CMB) observations. This discrepancy leads to the following questions: Are the systematic errors of individual measurements causing the Hubble tension, or do we need to reform the standard ΛCDM physics model so that early-time predictions and late-time observations of H0 converge?

I am currently developing a new distance indicator, the J-region Asymptotic Giant Branch (JAGB) method, for use in a cosmic distance ladder to measure the Hubble constant to high precision and accuracy. A new and independent measurement of H0 via the JAGB method may help shed light on the Hubble tension. The JAGB method capitalizes on the luminosity function of JAGB stars, a photometrically distinct class of thermally-pulsating AGB stars. During pulsations, or ‘dredge-up’ events in an AGB star’s lifetime, the star’s convective zone penetrates deep into the helium-fusing shell, bringing carbon to the surface, thus making the star appear redder than AGB stars that have not yet had deep enough ‘dredge-up’ events. The JAGB method as a distance indicator is extremely simple: in the J band, the luminosity function of J-region stars (distinguished by their (J – K) or (J – H) color) peaks at a constant magnitude, which can be used as a standard candle. For example, in the figure above, the horizontal line at J = 12.27 represents the mean apparent magnitude of the JAGB luminosity function for the LMC. The JAGB stars are easily identifiable by their red colors.

In my latest paper, Lee et al. (2021), I led a project to measure the distance to the Wolf-Lundmark-Melotte Galaxy using four different methods: the recently developed JAGB method, the near-infrared TRGB, the optical TRGB, and Cepheids. This was the first study comparing all four methods. I showed that the JAGB method is competitive with other local distance indicators in accuracy and precision.